How FightSchool360 Used Springly to Scale Their Martial Arts Club

Christopher Bernard is a passionate Krav Maga expert, boasting over 16 years of experience in the martial arts world.

Acting as the current Technical Director, it has been a long journey since Fightclub360 opened in 2011. Chris's passion and love for the sport have inspired exponential growth within the organization and they are now celebrating the opening of a third club in the local area.

Accepting responsibility for over 200 members is no small feat, yet Chris continues to successfully balance it all with the day-to-day management of his club, as well as classes for both students and instructors.

How does he do it? With the help of Springly, of course!

We relay the story, as told by Chris himself, of how one Krav Maga master and one software company joined forces to create the lean, mean, fighting machine that has become FightSchool360.

Since making the smooth transition from more traditional methods of management to Springly, Chris now has the time to focus entirely on his fighting mission.

No time to read now? Download it for later!

Out With The Old, In With The New

Before Springly, the FightSchool360 office would become overwhelmed, year in year out, with stacks of tedious admin tasks at the beginning of each new season.

The office staff, all of whom are volunteers, were forced to manually update the membership information of over 200 future champions. But this only scratches the surface of their true breadth of responsibilities.

When it came to new sign-ups, waves of documentation (i.e. registration forms, license applications, up-to-date medical certificates, passport photos, parental authorization, etc.) would clog up their inboxes and filing cabinets. While juggling both physical and online forms, each document needed to be carefully vetted, labeled, and filed for later reference.

Until just last year, everything was stored in a shared folder on Dropbox, a collaborative online storage tool. While Dropbox has many advantages, the office staff couldn’t help but feel like they were fighting an uphill battle. With no way of delegating specific access rights to different administrators and without a fully integrated CRM database, files would get lost, photos misplaced, and folders duplicated.

The club decided to compensate by adopting additional digital tools to make up for the shortfalls of Dropbox. However, the transferring of data from one platform to another resulted in a loss of precious Krav Maga time.

Entire days were being spent navigating across the multiple platforms, turning even the most basic of admin tasks into an ordeal. Over time, it became clear that their true mission, offering first-class support to the club's fighters, was beginning to take a back seat.

"We're a nonprofit, the office staff are volunteers, no one has time to spend hours on spreadsheets, listing licensees, looking for check numbers, entering license numbers, etc."

With this in mind, Anthony, FightSchool360’s resident computer expert and club treasurer, decided that enough was enough. He drew a line in the sand and began the search for a more efficient, sophisticated membership management solution.

"We needed something simple and effective, like Krav Maga."

After a quick Google search, Anthony arrived at Springly’s homepage, where he was presented with the answer to many of the problems his organization was facing. Energized by what he saw, Anthony immediately shared his findings with Chris and together they decided to take the plunge.

Give The Power to The People

Chris and Anthony later told Springly that a major factor in their decision-making process was the software's capacity to flip traditional management practices on its head.

Rather than burden office volunteers with highly repetitive and labor-intensive tasks, Springly distributes the workload and empowers members to take control of their own data entry process, by way of a simple online sign-up procedure.

As the end of their 14-day free trial approached, FightSchool360 subscribed without hesitation and entered into what became a long-standing, mutually beneficial relationship. The club received and continues to receive personalized support and training to keep them fighting fit and ready for action.

"The system supports the change in management and member registration really well, it's so much easier!"

Within just one week of starting their membership campaign with Springly, 50 new members had signed up and board members were finally seeing the light at the end of the tunnel. Immediately, their focus was able to shift away from member management, which had troubled them for so long, and towards the future of the club. It was an exciting time, to say the least.

"Springly is a system that allows you to integrate everything at once, so it's a time saver for sure."

Before switching to Springly, FightSchool360 was using SendinBlue, an independent emailing software for sending out mass communications.

However, after making the switch to Springly, the organization changed its emailing strategy dramatically as the secretary was now able to target specific groups. She was able to compartmentalize the communication channels of each while saving valuable time, all without the need for follow-up calls.

Considering that Chris and his team organize their membership tiers according to age, meant that tailored messages concerning training times, event details, and squad updates, could be sent directly to those who needed them. Information was finally being relayed to the right groups at the right time, all via Springly’s communication feature.

Given its ease-of-use, the secretary soon became a seasoned veteran at handling the feature and is now its number one fan. In particular, she loves the ease with which documents can be added as attachments to her email campaigns, as this was something that proved extremely challenging when operating her previous tool.

Best of all, this feature comes as part of the package, alongside all other membership and management features, and at no additional cost to the club.

This meant that FightClub360 no longer had to juggle multiple accounts from multiple different software, only to be thrown off balance by the constant switching.

What's Next for FightClub360?

The first challenge the club faced after transitioning to Springly was to reassure its members of the change. This involved communicating the benefits of an all-in-one platform, such as improved efficiency and more time saved.

"All the time, people tell me: 'Wow, computers are not my thing! I tell them that if it is well made, using computer software can be as easy as using a telephone…you can do it without any guide. And this is exactly the case for Springly!"

"Springly allows us to synthesize our efforts and take a holistic view of the future. It's the all-in-one aspect that interests us the most."

Since the club regularly organizes technical training sessions and gradings, the office staff are even considering taking full advantage of the events feature. They want to create specific ticketed events with payment tracking, custom details, and a simplified sign-up process for attendees, all of which can be done on Springly.

Ultimately, FightSchool360 has completely revolutionized its approach to management this year, whether by streamlining information in a new CRM or eliminating time-consuming processes like manual registrations.

Chris is delighted his volunteers are now able to spend their time mastering the tatami, rather than with their heads buried in piles of Excel spreadsheets.

Since the club is still growing, several features are left to implement, but there is no doubt that Chris and his team are on the right track.

One thing is for sure, when it comes to outstanding club management, this Krav Maga club takes home the gold!

Trish
The Holy Grail of Nonprofit Tips ✨
Get all of the information you need to efficiently manage your nonprofit with our monthly newsletter.
Mostarticles
How to Decide Membership Rules for Nonprofit Organizations
Understanding the 4 Essential Nonprofit Financial Statements
501(c)(3) Donation Rules: Everything You Need to Know
Everything You Need to Know About the Form 1023 EZ
Nonprofit Startup Grants: How to Get Seed Money
14 Day Free Trial 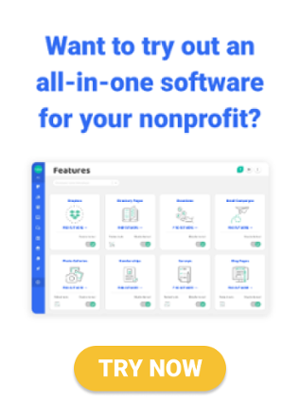 How to Grow Your Nonprofit Network to Amplify Your Impact